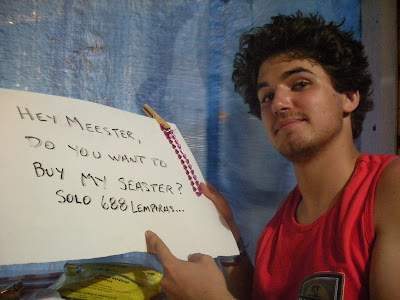 Went to Utila, got a room for free, including a semi-crazy doctor who gave this sign to Tom to walk around with. 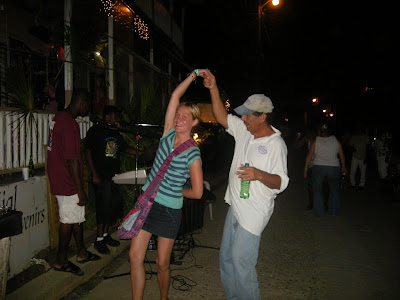 Utila was all about dancing with random people in the streets. Even if just for a few seconds. 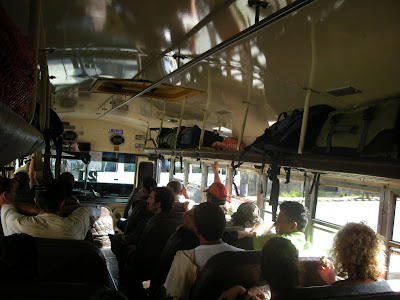 There is a certain charm with those local buses. Sometimes everything is so right its almost scary. The light, the sun, the people and the music from the radio. You want to stop time and keep that moment as a souvenir close to your heart forever. 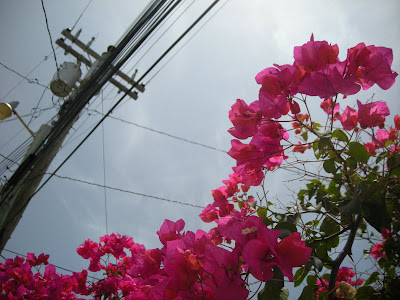 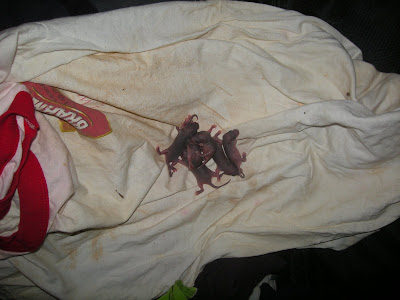 After coming back to Casa Guatemala I looked into an old suitcase in our house and found 6 rat babies. Cute.
Upplagd av ponks klockan Sunday, August 17, 2008 No comments:

And of course - it pisses me off.

I am back in Rio Dulce after a short trip to Utila, Honduras.
Utila is a beautiful island, you go there with a boat, Utila Princess bounching through the waves for more than 1 hour, making all tourists puke and feel shit because we dont understand we have to keep an eye on the horizon.
Utila is also all about diving. The island is swarming with dive-centers and cool diving-people, but I didnt take the time to do a course. I was fine with snorkling, which I think is a further less complicated version of getting under the surface, and still youre having almost the same experience. When people put on wet-dresses and start fumbling with their complicated meters and whatnot that belong to the diving-business, I want to put on my non-existant heavymetal suit, groam, play Slayer, puke all over and scream undefined bad words.

Then we went to the biggest techno what ever music festival in the Caribbean (thats what they say) Sunjam 08. Its like a smaller version of the Thai fullmoon-parties and I wanted to go just to know what its all about.
Sunjam its just one of these parties that acts like its on MTV, with halfnaked girls, bikinies, expensive T-shirts and neverending bad techno music. The only difference between Sunjam and MTV is that you cant turn off Sunjam. Youre trapped in a stupid beach-show and have to act the same as everybody else, have to dance, have to say "this is aaawsome, just fantastic, I am sooo happy..." and of course - it pisses me off.

IT PISSES ME OFF that there are festivals like this, that are made only for tourists, which are not even aware of what they are doing. The entrance for Sunjam is 40$ which clearly puts the frames on it - real working Honduran people are not welcome. Only rich bastards with a fortune can afford 40$ for a night out, and all the tourists are rich bastards.
I feel ashamed that I go to Honduras to attend a festival that the majority of the Honduran population never will experience.

At least, I can say I survived Sunjam.
Photos coming up soon.
Upplagd av ponks klockan Monday, August 11, 2008 No comments:

People are leaving and people are arriving here at Casa Guatemala. I am in a weird mood, feeling more alien than ever, actually struggling to be human, to talk and do all those things that humans like to do, like going to Sunjam in Honduras tomorrow.
I just hope I can make it without exploding or being too weird and putting people off or scaring people or what ever. But I feel the BIG CRAZINESS coming up. Theres nothing to do about it.
Upplagd av ponks klockan Thursday, August 07, 2008 1 comment: